The dungeon is made up of a series of floors that the player progresses downward through. On each floor there is a staircase which leads further down, which the player is only able to traverse after defeating all enemies on that floor. As the player goes deeper the dungeon gets progressively more difficult.

The Dungeon sits behind a gate in the tunnels beneath your house and the church.
The first time the player enters the Storeroom they will get a cut scene plays showing the Cultist, Snake, attempting to open the gate. In order to get through you need to retrieve the Keepers Key from the Astrologer and the Instructions for key from Snake (At a cost of 5 Faith). Next, studying the key with the instructions in the study table (along with two Faith) will produce Active Key (and give you Keepers Key back as well - may be a bug?). Giving the Active Key to Snake will initiate a cut-scene in which he reveals his hatred for the villagers and that he is plotting his revenge.
Afterwards, the player spots the diary the Astrologer asked you for; on a nearby table. You are incinerated by a trap that deals 150 damage. After re-spawning, Snake comments on your immortality and asks that you enter the Dungeon instead of him, and retrieve 5 Bloody Nails and a Bucket of Blood.
The trap that incinerated you has now been disabled and you are free to retrieve the diary, and to access the dungeon. 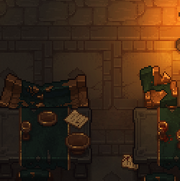 Broken furniture can be found occasionally in the dungeon and can be broken for Flitch, Simple iron parts, Complex iron parts, and with bookcases Ruined books.

There are only 15 Dungeon floors.
The layout of the Dungeon is to an extent procedurally generated at game creation from premade pieces.
You cannot descend in the Dungeon until all monsters on one level are killed, monsters do not re-spawn although they do heal when the Dungeon is left and re-entered. As soon as the last monster is killed, the next level unlocks on the teleport screen at the start of the Dungeon.
At the end of the 10th floor you will find another gate. Attempting to open the gate to descend further without the right key will inform you "It seems I'll need a key to go any deeper. I should ask Snake". The left over Keepers Key you received when you first unlocked the Dungeon is NOT the right key used to unlock this gate. In order to get past the 10th floor, the gate can be opened by using the Hunter´s Medallion. The Hunter’s Medallion is retrieved by finishing a part of Snake’s questline.

Throughout the dungeon breakable urns and barrels can be found which have a chance to drop loot when destroyed.