The morgue is one of the first important areas you see in the game. You process bodies here. Regardless of whether you toss corpses in the river, burn them, or bury them in a grave, it is recommended that you process their body in the morgue first. The morgue is where you can find Gerry. It's also here, where you can create and alter zombies to take over parts of your tiresome workload. 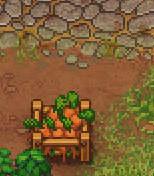 . It is dropped on the road in front of the morgue. After reopening the church, you'll have to put 5×
carrot per

corpse into the donkey's box (must be built first) to "pay" for the deliveries.

Bodies count against this capacity

even when outside the morgue. Once a body is buried, cremated, or tossed in the river, it does no longer count against

. Once made into a

zombie on a resurrection table, the body also doesn't count any more, even when it occupies a work station. 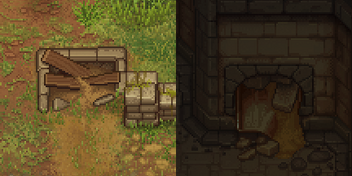 The corpse hatch allows corpses to be dropped directly into the morgue where they will decay slower. The benefit of repairing the hatch is slight so it is often not worth it to repair until later. 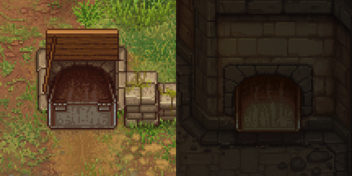 After fixing the hatch, the donkey delivers the corpse directly into the morgue. It will appear directly in front of the hatch. Unfortunately, there is no means to store it automatically onto a pallet to halt its decay completely. At least, the decay is slowed down that way. 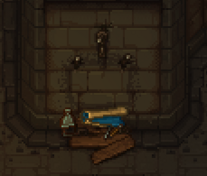 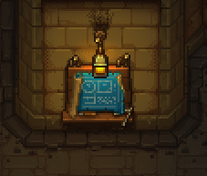 The workbench, called "mortuary desk", has to be repaired first, before using it. After learning the appropriate techniques, you can put up a lot of different workstations here:

(Possible Bug Warning: Corpses that spawned in the graveyard at the start of game may not acknowledge organs or parts put into them, effectively 'eating' the parts with no benefit. Parts can still be removed as normal. If you exhume a corpse with 100% freshness from the right/east side of the graveyard, be wary of trying to improve it via autopsy)

Use the preparation place to remove or insert body parts from corpses or zombies. Each organ has a different effect on

of a body and are required for crafting ingredients and completing quests. Corpse rating impacts

a corpse has, its

a corpse has. A grave cannot have a higher

than the number of

of a buried corpse. For the full article on how corpse rating works, see corpses. A table of each part that can be removed/inserted and its effect:

The number of skulls on a corpse is a combination of the number of the skulls on all its parts, as can be seen once Inquisitor's quest line advances far enough and the cultist perk is taken.

All the randomness of the corpses skull setup comes from Brain Heart and Intestine. However the generation of those is not as simple as the table makes it out to be. And in fact varies based on the stage of the game. For example, at one point during Inquisitor's questline you will start finding

parts (yes, the table above is wrong there can be a part with 4

). Those will later be replaced by "dark" versions (replaced in spawning that is, the existing items will not change). Also, it would seem that most of the time corpse generation is being balanced somehow, if one part is particularly bad the other two are usually good ones.

Once you have a good preparation table and the surgeon perk it should be possible to start cherry-picking important parts, either by remembering their effects and sorting them into separate storages, or, preferably, by utilising the cultist perk.

You can noticeably unburden your embalming efforts by collecting the better parts and making "frankencorpses" with them. A corpse with best possible variable parts in all 3 slots and both Blood and Fat removed will be only 1

away from 12. Though considering that best parts are rare it is probably best to compromise.

Also since zombies ignore all

, it's a good idea to keep parts with both skull counts high for use on zombies.

There is one exception to the regular corpse rules. The body of an ex-graveyard keeper found after excavating the archeology machine in the Talking Skull Cellar has two brains, and no blood or fat.

A corpse or zombie can be placed on the table and injected with embalming fluid to change its properties. A body may only be injected with each kind of liquid once.

corpse can be placed on the Resurrection table to make a

zombie from it. You need first to talk to Gunter in order to be able to build the table. To revive one, you'll need 10×
faith, 1×
zombie juice, and - of course - the