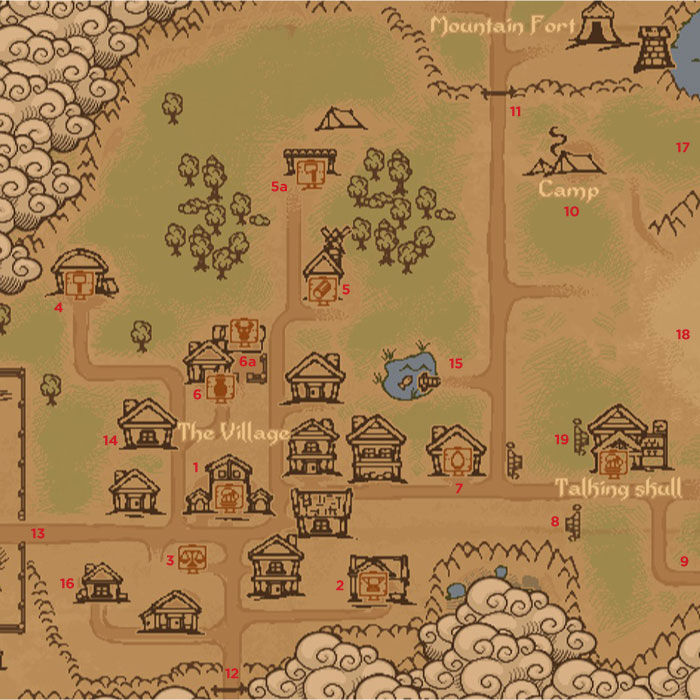 The village is a small hamlet in the kingdom, where the world is flat and there are six days to a week.

(1) The Dead Horse tavern is located in the center of the village. The innkeeper is called Horadric. It is always open for trading.

(2) The blacksmith is called Krezvold. His shop is found south of the tavern.

(3) The merchant only appears on

. He runs the trade office in front of which he's standing.

(4) The engineer Cory is located in the northwest of the village.

(5) The carpenter Tress is located north of the tavern.

(5a) The woodcutter can be found a bit further north of the carpenter.

(6) The dairy trader Rosa is located directly north of the tavern.

(6a) Her husband, the Shepherd a tiny bit north of her.

(7) Just an empty basket which trades some eggs and feathers, nothing weird. It's located next to the chicken farm, east of the tavern, on the road leading to the lighthouse.

(8) The vagabond Dig lives in a barrel east of the tavern. He sells hemp products like plants, seeds, rope and oil.

(10) A camp of several wagons around a campfire at the northern edge of the village. An important character, the gypsy baron, lives there.

(11) The mountain fort is located at the very northern edge of the village. The servant Koukol can be found west of the entrance in the woods.

(12) The road to the town is leading to the south and blocked by a barrier, guarded by town guards. You'll need a town pass to be granted access. Nevertheless, the town is not a desirable place to visit.

(13) The road to the west leads to the wheat farm. From here, you enter the village for the first time.

(14) The beekeeper can be found in the northwest of the village, close to the wheat farm.

(15) The village pond is found in the eastern part of the village, and can be used for fishing. The silver crucian can only be caught here.

(16) The pottery is in the southwest of the village near the wheat farm. This is, where Adam sells his marvelous earthenware.

(17) The cliffs are an interesting landscape found to the northeast of the village. One of the quests is located here.

(18) The beach is found east of the village, north of the lighthouse. It provides a broken bridge with unknown purpose, and a spot for fishing in the sea.

(18) The Talking Skull (unlocked with the Stranger Sins DLC) is found east of the village, north of Dig's Barrel. It is a Tavern that you build and own. It is also is a front to provide cover for the unearthing of an ancient machine and shows you images of the past. You can sell drinks and hold events which allow you to also sell food.

Community content is available under CC BY-NC-SA 3.0 unless otherwise noted.