Edit
watch 02:52
Roblox: DeepWoken - The Loop
Do you like this video?
Play Sound

zombie is unlocked relatively early in the game by completing a series of short missions and unlocking the right technologies. You first have to meet Gunter and do his bidding.

Most of the stations need to be unlocked by technology. Stations with an asterisk * can be operated by both a zombie or the graveyard keeper (you). There is also one quest where you need to install a zombie as a greeter for the Talking Skull tavern (Stranger sins DLC).

The downsides are that you will not get any Technology points from the working zombies. To counter that you can:

You may salvage one zombie at the beginning of the Stranger Sins quest line, but you can also make your own on a resurrection table by using 1×
zombie juice on a

corpse and 10×
Faith. To put a zombie to work, simply carry it to the station where you want it to work and place it down when prompted. It's important to note that you cannot create zombie juice (and therefore a zombie) without an Alchemy workbench (tier I), which is impossible to get in the early game. However, you will gain access to 3 zombie juice's that are provided shortly after talking to Gunter.

It is possible to throw zombies into the river or bury them in the graveyard to dispose of subpar or not needed zombies. It is advisable to remove all

before doing so. Zombies get no penalty from

but a grave does.

Zombies have a stat called "Work Efficiency" that represents how effective their work generally is. This stat directly relates to the number of

skulls will have no effect. A zombie can be modified, much like a regular corpse, as many times as is necessary either by autopsy at the preparation place or injections at the embalming table.

Efficiency is compared to the players crafting speed. For example a task that take 2s if done by the player will take 20s for a 10% efficiency zombie.

Efficiency doesn't have any impact on transport speed. Thus, it is a good idea not to waste injections or energy on preparing zombies that are going to be used in a Porter station.

Maximum efficiency can be achieved by the following steps:

There is also a guide to preparing 12 skull corpses.

The order in which these steps are applied does not matter, although you will not be able to apply
silver injection and
gold injection, if the corpse does not have at least 1 and 2

respectively at the time. You can work around this by either temporarily replacing other organs or applying
dark injection.

"Disclaimer: There may be other ways but this is how I get it. I know Dark Injection can help add red skulls if you need it to START. 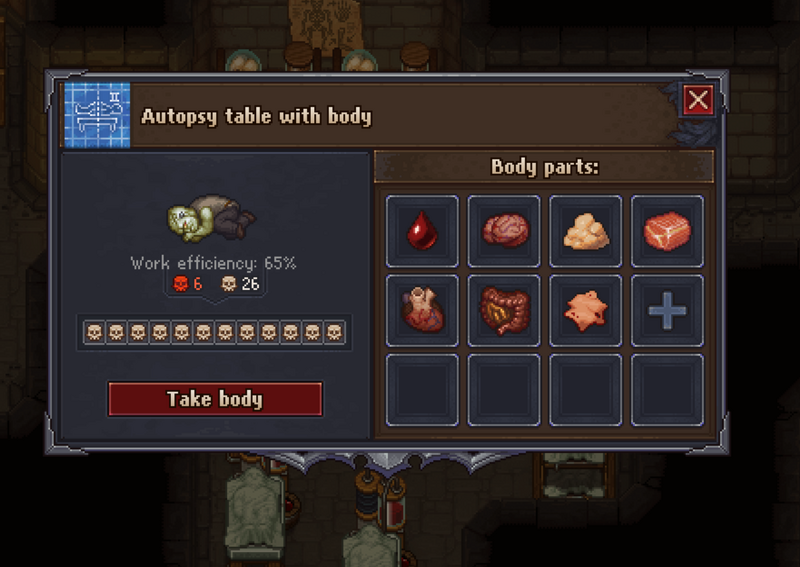